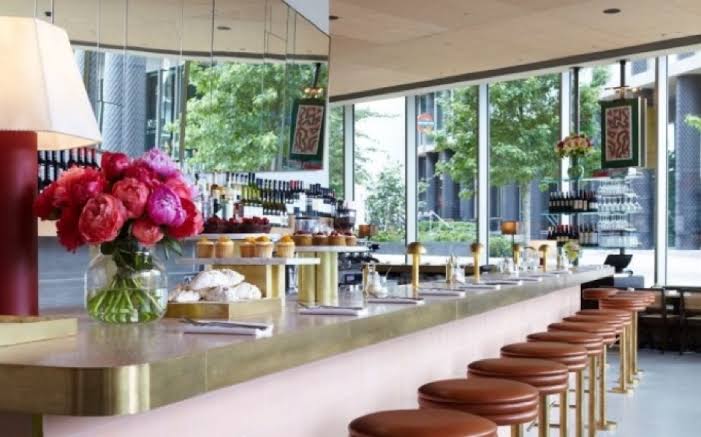 Dayum, I really love London. Although I’ve never actually lived in the British capital I’ve spent lots of time there over the years while growing up. Despite that, I never fail to turn into a bit of a tourist when there and London never fails to charm me. In my opinion, London is such a cool, buzzy, interesting city, and having just spent an awesome weekend there, I’m more keen than ever to live in London after I finish uni. Small matter of getting a job to contend with first but let’s disregard that for the moment while we dream of life as a young professional in the big city. Long time bezzie and dutiful hostess for the weekend, Georgie, and I awoke on Saturday morning to – you guessed it – rain. Classic England eh? But that didn’t deter these two galpals, reunited for the first time in far too many months. As the très cool Londoner that she is, Georgie knows lots of très cool places and I was thrilled to have her as a personal tour guide. 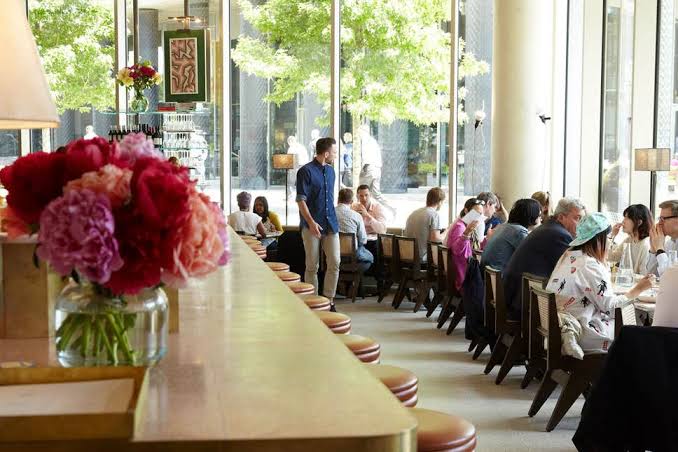 Although we may both be money-poor, Georgie and I are happiness-rich and full of joie de vivre, and we decided to live the dream and go out for brunch in Notting Hill. Brunch! In Notting Hill! I KNOW! Oh wait. I’m meant to be a cool Londoner. Yeah, so brunch in Notting Hill. Whatevs. Pretty casual. I love the idea of an indulgent, long and leisurely brunch at the weekend, but to be honest it’s something I only very rarely do. We made our way into beautiful Notting Hill (more of that to come), and to Georgie’s brunch spot of choice: Granger & Co. Despite the drizzle, hungry brunchers huddled under umbrellas in a (typically British) queue snaking out the door and down the pavement, and we dutifully joined, peering in at the delicious-looking platefuls being served through the window. (You can’t book at Granger & Co, and a queue is a good sign really, I’d say.) We didn’t have to wait long though and were soon shown past a selection of incredibly enticing cakes on the counter to a delightful table for two.

No sooner had we sat down than we were brought a large bottle of chilled tap water to sip while perusing the menus. I tell you what, living on the continent doesn’t half make me appreciate free tap water (it’s just not done over here!) and it was really nice to be brought it without having to ask and thus feel like the paupers we are. As we ummed and ahhed over the amazing menu (we basically wanted everything), we ordered a tea for me (obvs) and coffee for Georgie and were brought them almost immediately. I loved the fact that I was brought my own little tea pot with proper tea leaves, and that also meant I could ask for a top up of hot water and thus drink tea to my heart’s content (almost.) I was toying with various options so had to ask our delightfully friendly waiter his advice. After hearing what ricotta hotcakes actually were, I was sold. Don’t know what they are either? Ooh the intrigue, eh? Well hold on just one moment, dear reader, and all will soon be revealed. Just you wait.

As we waited for our food, Georgie and I filled each other in on our lives and caught up, chatting away as if we’d never been separated. Always the sign of a good friendship, I’d say. We soaked up the lovely, relaxed late-Sunday-morning atmosphere, excitedly noticed the rain was giving way to sunshine outside, and people-watched our fellow diners. There was a stylish, young crowd in Granger & Co, perfectly matching the trendy but laid-back interior and vibe. There were a lot of brunch dates going on, whether boyfriend and girlfriend, mother and son or just two friends catching up like Georgie and me. However there were also people enjoying brunch for one, often reading one of the papers offered by the restaurant. And why not just treat yourself to a nice brunch and some time to think? I always find it interesting to see who’s ordering what, too. Yet again though, Georgie and I weren’t waiting long before our food arrived. YAY FOOD!

And oh, what food we had. Naturally, we’d both gone for big platefuls. For me, the ricotta hotcakes, served with banana, maple syrup and honeycomb butter: And Georgie went down the savoury route with broken eggs, ricotta, spinach, pine nuts and grilled sourdough bread. It was then that conversation was replaced by appreciative mmms, happy munching and exchanged looks of “OMG this is SO good!” And mine really was. Considering how many portions of the ricotta hotcakes I saw whizzing round the restaurant, I’ve come to the conclusion they may be a bit of a classic at Granger & Co. I want to eat them again. When eating out, I always like to order something I wouldn’t make myself, and I’ve certainly never made ricotta hotcakes. They were indeed like pancakes, but thick like scones, super light and wonderfully fluffy. With the banana, honeycomb butter and maple syrup, it was a veritable feast. And I polished it off quite happily.

Judging by the lack of remains on her plate I’d say Georgie’s went down just as well.

So yes, I liked Granger & Co a lot and would thoroughly recommend it. There was loads of staff, all of whom were friendly, knowledgeable and efficient. Georgie oh-so-smoothly dropped her knife at one point, and mere seconds later our waiter had swooped in with a new one. He also topped up our water non-stop without us even having to ask.

What’s more, the loos were nice. They had hand cream. And we all know hand cream is the sign of a nice loo, don’t we?

The final cherry on the (ricotta hot-) cake was that if you download the Zapper app (which I’d never come across before) and use it to pay, you save a fiver on your first bill. And that’s exactly what we did! We just scanned the code on our bill and hey presto we were good to go. For London and how lovely it was, I don’t even think Granger & Co was too pricey. As it’s situated right in the heart of Notting Hill amongst trendy unique boutiques, chic chains (like Whistles, Zadig & Voltaire, the Kooples etc) and the most glamorous charity shops I’ve ever seen, Georgie and I decided to take a little digestive stroll round the neighbourhood. Although Notting Hill had been one of my gentrification case studies in geography at school (yes, really… The film totally counted as revision in my books), I hadn’t actually been there before last weekend.

The houses are all absolutely beautiful – mainly either a classic shade of cream or white, or painted a fabulously bright colour. And as well as all the stylish boutiques, Notting Hill is home to the famous Portobello Market. Unsurprisingly for a Saturday, it was full of happy punters perusing the wares.

We strolled through and abrosbed up the buzzy vibe. Before long, however, Georgie had to go to work. With nothing to do but shop and thus feeling very much like the housewife in our marriage, I decided to carry on exploring Notting Hill. As interesting as the market is, it’s swarming with tourists and I actually enjoyed wandering up and down the residential streets and admiring the incredible houses much more.

I mean, who gets to live here?!

I walked up and down the gorgeous crescents, casually peering into the sleek kitchens and not caring in the slightest that I was utterly lost. It was a mild but muggy day, but the warm sun was starting to break through the clouds. I soon found my way back to a bustling street, full of vintage shops, appealing eateries aaaaand all the aforementioned tourists. Never mind, I hopped on a tube to an even more touristy part of London, but that’s a whoooooole other blog post. To sum up: I really liked Granger & Co. and Notting Hill and had a wonderful time dreaming of what life could be like if I actually lived there. One day..