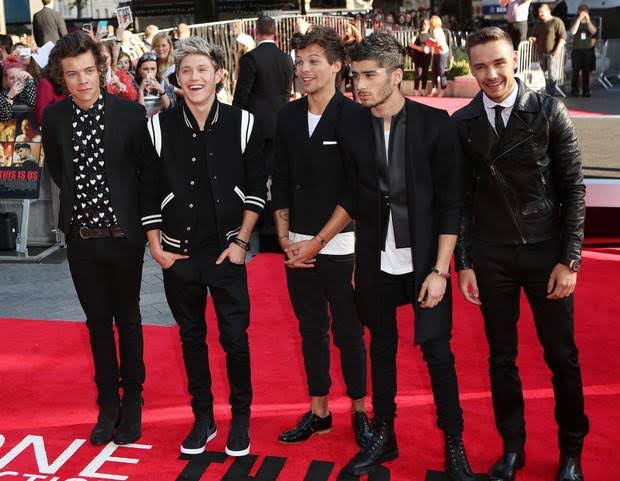 In 2012, the Shrimp (also known as Holly, my sister) and I went to see One Direction on their first tour, Up All Night. We were ridiculously close to the stage and it was awesome. A year later we managed to get even more sought-after tickets to their Take Me Home tour. Our seats were further away (making us realise how lucky we’d been the previous year), but it was still awesome. This year, 1D are doing their biggest tour yet – Where We Are, a massive tour of the biggest stadiums in the world – and Shrimpy and I very nearly didn’t get to go. But we did. And it was awesome. When tickets went on sale aaaaaages ago I knew I’d be on my year abroad but didn’t know where I’d actually be, so we didn’t try for tickets. Then the tour started, the photos, videos and promotion came out, and Shrimpleton and I got somewhat depressed that we weren’t going this year.

So when we discovered extra standing tickets for the Wembley Stadium performances were being released, we decided to just go for it, despite how much the whole trip was going to cost. SUCCESS! Le Shrimp got a pair of tickets and we were off to Wembley. I reluctantly (due to the price) booked my travel from London and back – Eurostar there and Megabus back. The former is expensive, the latter is so cheap. For £18, I got from London Victoria to the centre of Brussels in six and a half hours. Luckily Monday was a Belgian bank holiday! Realistically, the journey was rather pleasant. There’s wifi, sockets and a loo on the bus, I had plenty to read/watch/eat, and rather enjoyed travelling through England, France and Belgium. And considering the super wonderful weekend I had in London, it was totally worth the travel costs. So on a gorgeous Sunday afternoon, I met up with Shrimple and we made our way to Wembley. Gates opened at 4.30pm, and knowing we didn’t have set seats, we tried to get there as soon as we could. The hardcore Directioners must’ve thought the same – at 4.30pm there were already massive queues into the venue.

Shrimp and I joined and were herded like cattle into the stadium. To be fair it was very well organised and there were tons of security to control the hysterical fans. We also got wristbands. YAY WRISTBANDS! I’m pretty used to being one of the oldest fans at 1D concerts (who isn’t a parent or guardian) by now. My fellow concert-goers were exactly who you’d imagine: clad in 1D clothes and jewellery, neon face paint revealing which member they heart most, and clutching banners. We finally got into the stadium and ran to the best position left. It was nearly four hours before 1D were due on. And it was BAKING! Open-air stadiums are great though, and we were pretty lucky it didn’t rain. No problem, I sat down, whacked out my Belgian magazine, nommed my packed tea and waited. The Shrimp and I alternated trips out of the stadium, and when I ventured out I was amazed at how much food and drink was available! Snog froyo, brownies, smoothies, burgers, pizza, chips… It was all awfully tempting. But ridiculously expensive, unsurprisingly. As the evening drew in, Wembley stadium filled up, and at just before 7pm, 1D’s warm-up act, Five Seconds of Summer came on. For a support act, these guys are pretty established. The Australian band of boys (they play instruments and thus make clear they’re NOT a boyband, but rather a band of boys) have recently been nominated for “Best Newcomer” at this year’s Kerrang! awards actually.

Usually at concerts barely anyone’s heard of the support act. Not so with 5SOS, my friends. There were tons of tweens with banners and faces painted showing their support for the rock-pop group. I didn’t know much about 5SOS, but I liked them. I’ve listened to their biggest hit, She Looks So Perfect on repeat all day actually. The Shrimp was already a fan and so filled me in on their names, ages etc. They’re all younger than me. That’s depressing. And before you ask, no, not all of 1D are – Louis is in fact 22, duhh. 5SOS played a pretty long set, much to the audience’s delight. And then it was back to the waiting. Throughout the night, security handed out cups of water (so great), and we had a particularly great security guy near us who was dancing and singing along to all the music videos shown on the screens in the run-up to 1D. He seemed to be a particular fan of Olly Murs. Rather entertaining.

Oh, what a show it was. Harry, Niall, Liam, Louis and Zayn gave a cracking performance as per. And, unsurprisingly, the audience lapped it up.

It was a battlefield in the standing zone though, and Shrimpmeister and I sadly got separated. We could barely move but at least we could see. As a tall woman, I thought I’d have a clear view over the heads of all the children. Not so, my friends. Teenagers be tall these days. Watch out for the giant hand, Harry! Excitingly, 1D came out on to a part of the stage in the middle of the stadium multiple times, and were thus close enough that I could practically make out every curl on Harry’s beautiful head in detail.

At one point they even rose up into the sky.

It’s amazing the power these guys have. One wave and the whole audience swoons. They were their sual banterous selves, but there were fewer organised asides than in previous concerts. By that I mean no hilarious videos or questions from the audience, but they packed in the songs, obviously focussing on hits from their latest album. Have you heard any of their latest stuff? It has a totally different feel to their music from a couple of years ago. Much more grown up. Trust me. Of course we were treated to the classics though – how could they not do ‘What Makes You Beautiful’!? Every girl (and a few guys) jumped and danced and screamed and sang along all evening as the sun set and day turned to night. Unfortunately I had a particularly vocal but sadly tonedeaf girl in my ear all night, but what can ya do? I’m no Mariah Carey myself. To be honest, it seemed like we all watched half the concert through the screens of our phones and cameras. But personally, I love having photos and videos to look back on.

The whole concert was quite a spectacle.

There were fireworks, lasers, streamers and cool graphics throughout. The guys were all dressed in black and white (black skinny jeans being the staple), but their current look is a massive contrast to their seemingly super-coordinated look from two years ago. I myself rather liked Harry’s shirt, even if I have realised he dances round the stage in a somewhat camp manner. Still got big love though. I, however, just about managed to control myself. The same cannot be said for all the Directioners in Wembley that evening. Many a girl had to be carried out due to uncontrollable tears or fainting. Srsly. Fainting girls aside, we were apparently the best audience not just of all their Wembley performances (this was their third consecutive sold-out night in Wembley Stadium!) but of the whole tour, so I feel pretty proud. The 1D lads finished with the above adorable group hug. Cute. You can’t deny it’s blimmin’ impressive what they’ve achieved. And I think it’s pretty cool to have been to each tour and seen them get bigger and bigger.

I’d never been before but Wembley Stadium is GINORMOUS! 1D just seem like nice guys. Simply by donating 50p from every ticket sold, they’ve raised £600,000 for the charity, Stand Up To Cancer. Pretty darn impressive and I’m really glad to have contributed.

To finish up, I’m going to leave you with this:

It’s a mash-up of 1D’s Kiss You and 5SOS’s She Looks So Perfect and in my opinion it’s AMAZING! I seriously love it. God, I’m such a fangirl. I wonder when I’m going to grow up and stop loving 1D so much… Well, for now I’m a Directioner and proud. PS Thanks to Shrimpy McShrimperton for letting me use some of her pictures in this post.