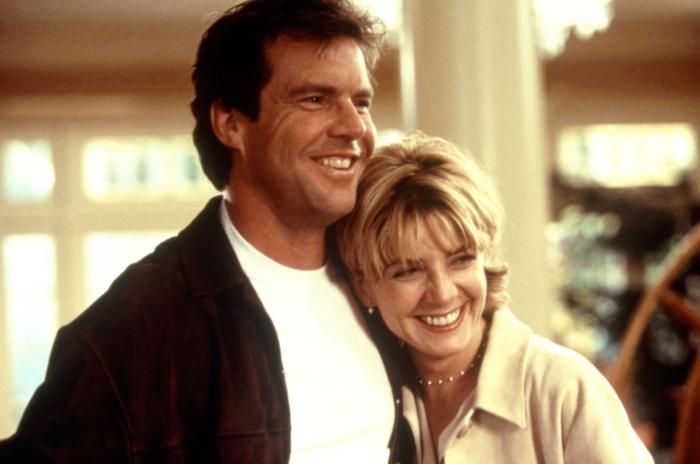 I don’t think there’s a film I know better than The Parent Trap. And I’m talking about the Lindsay Lohan version, of course. Just ask my sister. She can vouch for the fact that I know a good 90% of the script of by heart (and thus watching it with me can in fact be a slightly annoying experience, even when I try and restrain myself from quoting along. Soz, Shrimp. Every time someone says “It’s fate”, I follow up with this in my head. OK, sometimes out loud: Can you believe the film came out in? The year I turned SIX!? I actually remember going to the cinema to see it. And then we got the video – something today’s kids will never know, alas – and I watched it over and over and over again. 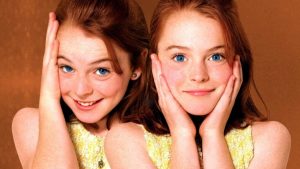 I still do. Every time I go home. Yup, on our old video player (the Hosies are a bit retro like that.) Fuzzy quality aside, I still love that film to pieces. I think there’s something about childhood faves that make them stick in your memory so strongly. And I guess when you’re little your sponge-like brain just absorbs and remembers things so easily. If I was doing a degree in The Parent Trap I feel pretty confident I’d get a first. Parent Trap or Facebook stalking, they’re probably my specialist subjects. I couldn’t resist taking Buzzfeed’s How Well Do You Know “The Parent Trap?” quiz. Not ashamed to admit I got 19 out of 20, because really, you have to be a psycho die-hard fan to know how many times the word “actually” is said or sung in the film. (Take the quiz and let me know how you do!)

It wasn’t till my early teens that I discovered it was one actor, the little-known Lindsay Lohan, playing both twins. My mind was blown. Even when I watch it now I marvel at how slickly the shots with both twins are done. I’m of the opinion The Parent Trap is Li-Lo’s finest film performance to date. And I know I’m not alone in my love for this film – it’s cult viewing for a generation of girls, much like Mean Girls later on too. (Oh hey there Li-Lo again.) When the late Natasha Richardson died I was at secondary school, and we all mourned the tragic loss of ‘Parent Trap mum’, which she will always be for us. Weren’t Liz and Nick just the best parents?

And Who Didn’t Want An Identical Twin As A Result Of Watching The Film?

I love the soundtrack too. Every time I hear ‘Hear comes the sun’ I think of ‘Annie’ twinkling the hanging glass thingy in her mum’s bedroom and the two of them walking through London. When home over Christmas, I obviously watched Parent Trap again. But this time, with a slightly more critical eye. I’m not sure why. My eyebrows occasionally raised and I found myself spotting a few things that don’t quite add up…

1. If the twins meet at Camp Walden (“for girls”) 11 years and nine months after their parents got married, camp is in the summer and they’ll be 12 on October 11th, Liz must’ve been about to give birth (to two girls that were “6 lbs, 11 oz, 21 inches long”) when she got married. And she definitely doesn’t look preggers in the wedding picture…

2. Where does Martin go when ‘Annie’ arrives back from camp? They pull up at the house in the taxi, we see Martin get out, but then ‘Annie’ goes into 7 Pembroke Lane alone…

3. When walking home with ‘Annie’ after the dress-fitting in her studio, why does Lizzie (“or does everyone call [her] Liz now?) just pick up a paper from a newspaper rack outside a shop without paying ?

4. When ‘Hallie’ meets Meredith by the pool at home, Nick says he’s going in for champagne and chilli (real Hallie’s fave food, with cornbread) but doesn’t come back with chilli, just “a bottle of [his] special reserve label”.

5. After ‘Annie’ honours the old camp tradition of talking to your friend (“Mildred”) from inside a closet, she crawls out to find her mum, grandfather and Martin standing right outside the door. Surely they would have heard what she was saying, and that she was speaking in an American accent?

6. If camp is eight weeks long how do the twins have long enough holidays for that and time at home AND a camping trip (“What camping trip? The one we take every summer before school starts”)?

7. How rich must the family be to casually miss three flights from San Francisco to London to stay in California and go on the camping trip? Nick tells the girls this isn’t funny and they’re going to make their mother miss her flight. But wouldn’t most people be like, “Um, no, daughters, we’ve paid a lot of money for three flights back to London, which were very expensive as we booked them at the last minute in the first place. Ergo, we’re going.”? If anyone can shed any light on these pressing issues or has any to contribute please do let me know. I don’t mean to pick holes in the film. As you can probably tell, I am a HUUUUGE fan. I think it’s a brilliant beyond brilliant film. Do you?