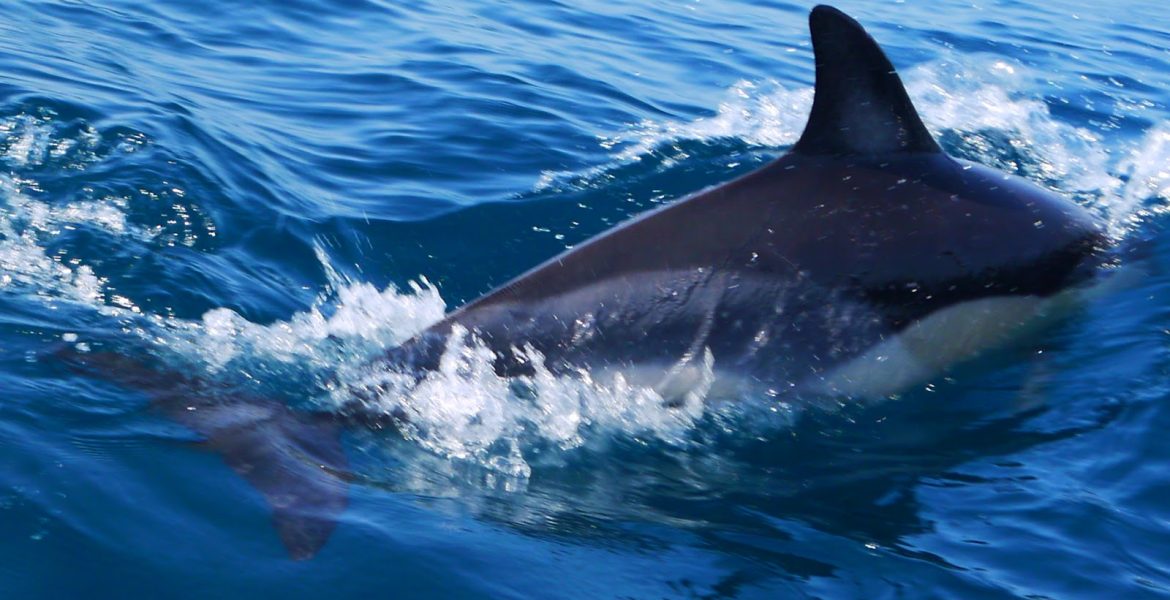 As a young girl, I was somewhat obsessed with dolphins. Completely and utterly obsessed really. I even wanted to be a marine biologist so I could work with dolphins, but then I realised that would require a lot of science and so scrapped that plan. I’m hoping journalism is a less lab-based career choice. My inner dolphin fangirl made a reappearance last week when we went on a dolphin-watching boat-trip. It wasn’t even my first dolphin trip – we’d been before a fair few years ago – but you guys, *adopts American accent* it was totally blimmin’ AWESOME! 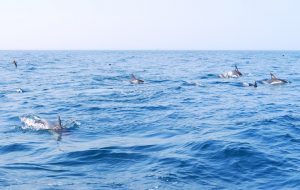 We went with the very well-established company Bom Dia from Lagos’ beautiful marina. Although I’ve been coming to Lagos for over 15 years, the beauty of the marina never fails to woo me. I love admiring the boats, the way their flags clink in the wind, watching the shiny silver fish glint in the sunshine, the buzz of the many cafés and bars. It’s so charming. We were on the first dolphin-watching trip of the day, leaving at 9.30am – apparently your best chance of seeing dolphins is early when the sea is calmer and there’s less wind.

The Shrimp, Ready To Go

Lifejackets donned, we excitedly clambered on board the nine-seater speedboat. I may have been extra keen and thus got myself the seat at the very front of the boat, but you snooze, you lose, amaright? Aside from the one solo seat at the very front, the seats on the boat are only two abreast, meaning everyone gets a good view, which isn’t the case with all the dolphin-watching trip companies. As we ventured out of the marina in the morning sunshine, one of two marine biologist staff (clearly more dedicated to dolphins than yours truly) gave us the safety run-down, assuring us that the boat was super safe and pointing out the emergency exits: over each side of the boat. Good. We slowly made our way out to sea, and once on the open water the driver put her foot down (probably not really, I have no idea how you drive a boat) and the real fun began.

As we bounced and whizzed over the sparkly, gently undulating sea, I could not stop laughing. We were flying FAST over the waves and I was loving it. I’m a huge rollercoaster fan, and being at the front of the boat meant I got the full effect. Dolphins or not, I was having a great time. It was also amazing to look back at the pretty coastline and look out at the expanse of ocean. I don’t know about you, but I like to think of the sea as my spiritual home. (Before I wanted to be a marine biologist I wanted to be a mermaid, natch.). Although a dolphin-sighting can never be guaranteed, the friendly staff told us they knew the usual feeding-points and would take us there. I was keeping me eyes peeled and oh god there there i think that was a dolphin leaping out of the water!

We all got rather excited but it turned out it had in fact been a very large tuna. Who knew tuna could leap?! Well now you do. On we went in search of those most majestic of mammals. Reader, we found them. In a big way. The boat slowed to a halt and before we knew it we were surrounded by a huge pod of beautiful beautiful dolphins. It. Was. Amazing. (Apologies for the less than amazing photos – dolphins are hard to photograph and franchement I didn’t want to spend all my time trying to get the perfect picture instead of actually admiring them.)

The Sister Did Get This Great Video Though!

We slowly moved with the pod for about half an hour, it was so so incredible. They’re so elegant and graceful and lovely. I wish I was a dolphin. There were baby ones with their mums, they leaped and they dived perfectly synchronised in twos and threes, they swam under the boat. The marine biologists told us the dolphins were essentially socialising and travelling at the same time. How cool is that? So efficient. I love it. As the water was so clear and the dolphins stayed at the surface (although they can stay under water for four minutes without coming up for air), we got beautiful views of them super close-up.

They’re Just The Most Wonderful Of Creatures.

I also learned that part of the reason they like to stay so close to the boat is that the movement of the water makes it easier for them. Smart cookies, these dolphins. It was so special to see them in the wild, in their natural habitat, just doing what they do. But all too soon it was time to say goodbye to our dolphin pals and head back to shore. Boo. There was only one thing for it: freshly-squeezed orange juices (the oranges here are incredibly sweet and as a result the juice is sensational) and pastries. It had to be a Portuguese custard tart for me!

I absolutely loved our dolphin trip and am so grateful to have had the opportunity to do it. I only wish I could convey how magical it really was here. You’ll just have to go and experience it for yourself!

Lunch At The Mae Deli By Deliciously Ella

Turn Your Tweets Into Poems