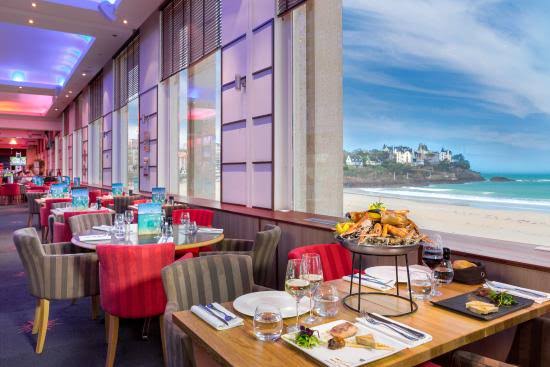 It’s somewhat rare that all five of us busy Hosies are actually together, so when we realised we could all be in Brittany for just one night, we decided to do something a bit special. Holly was 18 in June, Jamie 23 last week, and I’m going to be 21 in September, so instead of going to Pizza Express three times, we pooled our birthday dinners and went out for a real treat of a meal in Brittany. We chose Bistro Resto Oliver in Dinard. We arrived in Dinard with plenty of time to stroll round the seaside town on a lovely sunny evening. I absolutely love being by the sea – the boats, the ripples, and when set to a backdrop of blue sky it’s just perfect. In a flowy sundress and ballet pumps, I felt like I wanted to dance down the cobbled streets and skip down to the sea. It may sound cringey, but it’s true. I’m just that kinda gal. 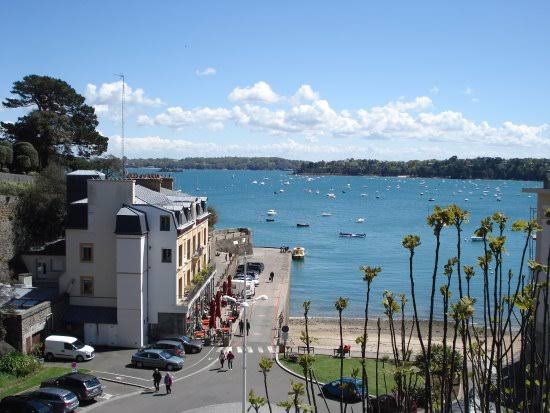 I was loving life.

This is nearly a whole family photo – dad was taking the picture. Classic dad eh? I love the picture, but I’d love it more if he was in it too. Admiring the view. I was doing a bit of a Rose-in-Titanic, almost looking over too far. But that was enough view-admirage. It was time for food-eatage. I was deliberately wearing a smock. Wearing a tight dress to a big dinner is a rookie error. I’ve learnt from my previous mistakes.

So, to the restaurant!

Our round table for five was ready and waiting. Mama Hosie had already shown off her French skills by booking the table over the phone a couple of weeks earlier. When she said we were a group of five, Oliver immediately suggested a round table, which was great. I had a good feeling before we even arrived. When we did arrive, however, Oliver popped out for a little chat, which was lovely. We also liked the fact that you could see into the kitchen and watch Oliver bustling around. Or maybe he just wanted to watch his diners. While trying to decide what to order, we had a glass of Champagne each as an aperitif. Well, Holly didn’t, as she’s not a fan (weirdo.) Instead of the usual Coca Light, however, she was brought a bottle of local Breton cola and it was délicieux. (I had a sip, of course.) We were also brought a little plate of traditional Breton craquelins (sort of Yorkshire puddings crossed with crackers, I think) and a tuna mix to nibble on while perusing the menu. I like the fact that Oliver uses so many local products.

It’s not a huge menu, but I think that’s a good sign as it shows the dishes they do offer will be done really well. We placed our order and got down to some serious conversation: trying to settle on a name for our new puppy. Despite having discussed it for most of the evening, we still haven’t agreed on one. Still, we were having fun. The good thing about being with your family is that you can be completely and utterly your true weird self. And I am very weird. As are the rest of the Hosies. I love my friends, but there’s nothing like family. While we chatted, we munched on some yummy crusty bread, served in a rustic paper bag (it looked better than it sounds, trust me.) I tell ya what, the French really know how to do good bread. And don’t you love it how they automatically refill the bread basket without even asking? Bread to your heart’s content.

However, before we could even get onto our second load of bread, our starters arrived.

I had basil-infused Charlotte summer vegetables with a ‘brick’ of crispy goat’s cheese. Mmm. It wasn’t too heavy, which was great considering what was coming. Oh yes. This was very very good. A veal cheeseburger, chunky chips (my favourite kind), salad, what I think was a gingery pumpkin purée and a brown sauce (we genuinely couldn’t work out what it was but hey.)

It was probably one of the juiciest, snazziest and all round best burgers of my life. I think the amazing crusty sesame bun really added an extra yum factor. Posh burgers are all the rage right now, and I’m a big fan. The rest of the fam all adored their dishes too – I’m told from a reliable source (my sister) that the steak was really quite spectacular.

Mum had this sea bass dish:

As a poppy seed lover, she particularly enjoyed the seedy addition to her rice. It’s safe to say we were all sufficiently full by this point, but neither Holly nor I was going to skip pudding. Obviously. Naturally, we wanted everything on the menu, and were very tempted by the giant raspberry macaroon with white chocolate mousse, but in the end we went for the chocolate fondant with traditional Breton salted caramel sauce. We’d heard good things about it, and we were not disappointed. A little crust round the edges and gloriously melty and squidgy in the middle. Accompanied by the caramel, it was heaven. I’m not a huge fan of cream so I used mine to write a message back to Oliver:

I’m quite the artist. Not.

Mum, Dad and Jamie had coffees, each accompanied by a mini Daim bar. That was a nice touch. I may or may not have eaten Dad’s. Don’t judge. And right at the end of our meal, we were served complimentary shots of Oliver’s special rum. Well, it’d be rude not to, wouldn’t it? It was a really special evening – delicious food, lovely atmosphere, friendly staff and great service. Oh, and the company was alright too, I guess. Put it this way, I was glad I wore the smock.