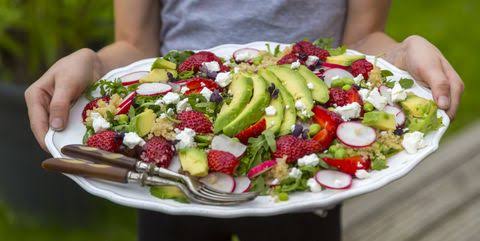 As much as I love my cakes, I also love eating healthily. In fact, it’s only by eating healthily most of the time that I can (just about) afford to have my cake and eat it. Nowadays there are all sorts of health foods and products out there to help us keep fighting fit, and I’m always interested in trying out new
ones. I feel really lucky to be sent products to review and will only ever write my honest opinion, so here are my thoughts on the latest health foods I’ve been fortunate enough to sample.

1. Nakd bars. These bars are great. They’re all natural and are basically just dried fruits and nuts mushed up with other flavours. That may not sound the most appealing but they really are tasty, and I found they hit the spot mid-afternoon and could easily replace your 4pm chocolate HobNob habit. I really like the fun personality on the packaging too. For example, before listing the ingredients in multiple languages they say, “Hello Europe, hope we spelt everything right.” I was sent a big box of loads of different flavours, from Pecan Pie to Chocolate Orange, and I liked them all (albeit some more than others.) I was particularly looking forward to trying the new Rhubarb and Custard flavour bar. Although the packaging said it contained only natural flavours I was concerned it might taste artificial. I’m afraid to report that it did. I wasn’t sold on the flavour.

However, I love the squidgy texture all the bars have and really enjoyed a lot of the other flavours. Berry Delight and Gingerbread are particular faves. The chocolate ones are tasty too – one lady on twitter told me she’s passing them off as chocolate bars to her son and he’s none the wiser! While the Nakd bars are indeed super healthy, they’re not low in sugar. The Rhubarb and Custard bar, for example, is 52% sugar! Yes, it’s naturally occurring sugar, but the concentration of the dried fruits means there’s a lot of the sweet stuff in every bar. Better than a Twix, yes, but still food for thought considering all the SUGAR IS YOUR ENEMY articles in the press at the moment. Each Nakd bar is wheat, dairy and gluten-free, around 135-150 calories, a lot of them are one of your five-a-day, and all in all I’m a big fan. Natural, healthy and down right delicious.

2. Slim Fruits Here’s the thing about having a salad for lunch: it seems like a good idea at the time, but half an hour later you’ve got the munchies again. Well, a couple of packets of new Slim Fruits were delivered to my desk at the perfect time on one such afternoon. These tiny little sweeties are supposed to “fill you up, not out.” They’re not soft and chewy but they’re not hard either. Apparently Slim Fruits contain “soluble fibre” which means they combine with water in the stomach and swell which helps to suppress hunger pangs and leaves your sweet-treat craving well and truly satisfied. I was sent two packets of different flavours: Rhubarb & Strawberry, and Peach Melba. Both are yummy but the Rhubarb & Strawb is
definitely my fave – they taste like summer!

The claims are great, but I’m always sceptical when it comes to products like this. Would they really make you feel full? Or just make you think you felt full? You could say it almost doesn’t matter as long as it stops you delving into the biscuit tin! I don’t know whether it’s just in my head but I do think Slim Fruits make me feel full and diminish hunger pangs. While they’re fat-free, sugar-free and high fibre, they’re unfortunately not all natural and contain various E-numbers. However they’re only two calories a pop and  are apparently packed with the same fibre content as six slices of wholemeal bread! If nothing else, Slim Fruits are a healthier alternative to sugary fruit pastilles and hey, they’re yummy. They’re £1.89 per packet and should be available in Boots and Holland and Barrett UK-wide.

3. Bare Naked Noodles I was really excited about these noodles. Low carb, low cal (less than 40 calories per pack!)… They sounded too good to be true! The portion size was big – much more than I’d usually have was I cooking pasta or noodles for myself. But hey, if they’re so low-carb why not have a massive bowlful, eh? I was going to eat mine with a few big dollops of mama’s bolognese, and I was looking forward to it. Unfortunately, they were not good. Well, I didn’t like them anyway. Usually if I don’t like something I’m sent I just don’t blog about it, but I thought these noodles fitted in to the rest of this post. I cooked them to package instructions, but they were bland, flavourless and had a rubbery texture. Get this: I couldn’t even finish them. And I NEVER don’t finish my food! I was mainly just sad to have wasted a
portion of mama’s wonderful bolognese. Oh well. I just don’t know what I did wrong! Maybe I need to try them with something else. Or maybe I’ll just stick with my wholewheat pasta.

4. Urban Fruit. The idea behind Urban Fruit is simple: it’s just fruit, picked when ripe and then baked  without adding anything else. By doing so, they’re making fruit a lot more portable – you can throw it in a lunchbox or carry a packet in your gymbag. No more bruised bananas or squished pears staining the lining of your handbag! (We’ve all been there, right?) It’s just simple fruit, made more mobile. I think this is a great idea as so often people choose unhealthy snacks as they’re just more convenient. No more excuses, people! Like the Nakd bars, Urban Fruit is still relatively high in sugar (32.4% in the
banana, for example) even though it is all naturally occurring. All gluten-free and vegan though. There are tons of different fruit packets: for example apple & pear, pineapple, blueberry & blackcurrant. They’re all super moreish. I tried the banana first and it went down an utter treat in the office, lasting the whole of ten minutes. It was chewy and soft and delicious. Just like with regular dried fruit though, because it’s all shrivelled up you end up eating a lot more than you would of the fresh fruit. I think I may have eaten about five bananas in one sitting. Oops. It’s hard to stop. Still, better a bag of baked banana than Maltesers, right?