Disclaimer: May or may not bring all the boys to the yard.

Snapchat-worthy? I think so. Thick, creamy, sweet and milky, who doesn’t love a good milkshake? I sure do. My sister, Holly, and I are total shake fanatics and struggle to resist treating ourselves should we ever stumble upon a Shakeaway, Ben & Jerry’s or Millie’s Cookies (yup, that’s right – if you haven’t tried one of their cookie shakes yet, you are seriously missing out.) When we were kids, Mama Hosie used to frequently whip up super simple yet super scrummy banana milkshakes – often alongside warm, homemade muffins for breakfast (hey, sweet tooth) – and we just loved them. Obvs. Should I ever find myself in such an establishment, I have been known to choose cocktails that are full of creamy goodness and thus basically milkshakes. Oops. 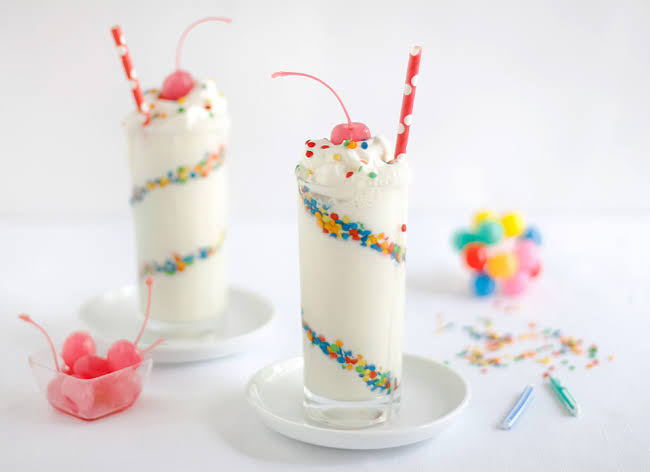 Yup, this is a cocktail. SO. YUMMY.

The awesome thing is, you can put pretty much anything into a milkshake (or a blender, for that matter.) If you don’t believe me, I suggest you have a peruse of the Shakeaway menu – you may be there a while, sorry. It’s epic. From chocolate bars and sweets to cakes and cereals, they will blend literally anything into deliciousness. Milk + ice cream + whatever-you-fancy. Simples.

Just enjoying a casual Shakeaway with Prince Harry. No biggie.

I think there’s something about milkshakes that is quite American. Whether alongside a massive burger or huge stack of pancakes, you can’t go wrong with a milkshake. It’s that whole image of being in a retro diner which I just LOVE. In fact, one of the best milkshakes I’ve EVER had (and that’s saying something) was in an amazing NYC diner on the Upper East Side just by Central Park: EJ’s Luncheonette. If When I go back to New York I am SO going to make a point of going there. I mean, this is a place that has a whole separate menu just for milkshakes. Um, awesome much? Unsurprisingly, I went for peanut butter flavour alongside my mountain of strawberry-topped and maple syrup-drenched buckwheat pancakes. Dayum, that was an epic brunch.

Living the American dream a couple of years ago.

The trouble is, with all that ice cream and full-fat milk, shakes aren’t exactly the healthiest option. Really, they should be considered more of a pudding than a drink alongside your meal. Bit rubbish, really, isn’t it? I don’t think there’s a clear line between smoothies and milkshakes – it all gets a bit fuzzy in the middle. Smoothies for breakfast are pretty de rigueur, but I myself am a big fan of milkshakes. Lightened-up, healthier, light milkshakes, that is. Um what? How can a milkshake be healthy? I hear you thinking, oh, doubtful one.

Well, I have two words for you: Frozen. Banana.

It is a MAGICAL ingredient when it comes to making healthy ice creams and milkshakes. Fresh bananas are always great in smoothies and shakes, but when frozen they’re even better. Just look at that thick, creamy yet healthy deliciousness! Combined with a spot of natural or vanilla yoghurt, frozen banana completely takes away the need for ice cream in a milkshake. Seriously. All you do is peel and slice a banana, pop it in a freezer bag and leave it in the freezer over night. The riper the banana the better, so whenever I have one or two that are turning speckly and brown (and I don’t have time to bake, obvs), I simply freeze them so I always have some to hand when that milkshake craving hits. You  know the craving. I recommend freezing one banana per freezer bag, then you know exactly how much you’ve got/need. Perfecto!

Also, just use skimmed milk and fat-free yoghurt. If you’re worried your shake won’t be thick enough without full-fat milk, you needn’t worry – the bananas are magical thickeners and you can always just add a little less milk than you would usually. I’m a big fan of natural yoghurt in my skinny shakes, but I’m careful not to add too much as I don’t want the tartness to overwhelm the sweetness of my milkshake.

The basis of most my skinny shakes goes like this (for one person):

Then the fun begins…

Actually, the base ingredients are delicious alone, but as I’ve said, you can basically add anything to a shake, perhaps depending on how indulgent or virtuous you’re feeling. Here are some of my fave add-ins:

A handful frozen berries – using frozen rather than fresh keeps the milkshake rather than smoothie feel. And with your healthy milkshake base, you may feel better about following Shakeaway’s lead and adding your fave chocolates/cakes/biscuits/sweets to the mix – that is literally all you do: whack everything in a blender and blend. The longer you blend for, the thicker your shake. Another epic ingredient in healthy milkshakes: Medjool dates. Inspired by Deliciously Ella, I used some in a shake for the first time for breakfast this morning and it literally blew my mind. Medjool dates are bigger, sweeter and fudgier than normal dates, and they lend themselves perfectly to shakes and smoothies.

Here’s what I put in my super-healthy banana date breakfast shake this morning:

150ml skimmed milk, 1 frozen banana, 3 pitted medjool dates, 1 tsp cinnamon, 1 tsp ground almonds. That’s it. And oh my gosh, it was so so very good. AMAZINGLY sweet and so deliciously thick that you have to drink it slowly. Does anyone else get sad when you finish a milkshake in, like, a minute? (Just me?) It’s crazy that there’s no sweetener in this shake but that’s the magic of medjool dates. I love the slightly rough texture and almost chew each mouthful a little bit. It tastes like it should be a pudding so it’s just insane that it only contains healthy ingredients. So what do ya think? Tempted to get experimenting with healthy milkshakes yourself? I do hope so. And please let me know your ideas, suggestions or fave add-ins! PS. I know the current trend is to serve shakes in trendy glass jars with a handle and a stripey straw, but I’ve had to make do with a big ole beer glass. This is Germany after all.