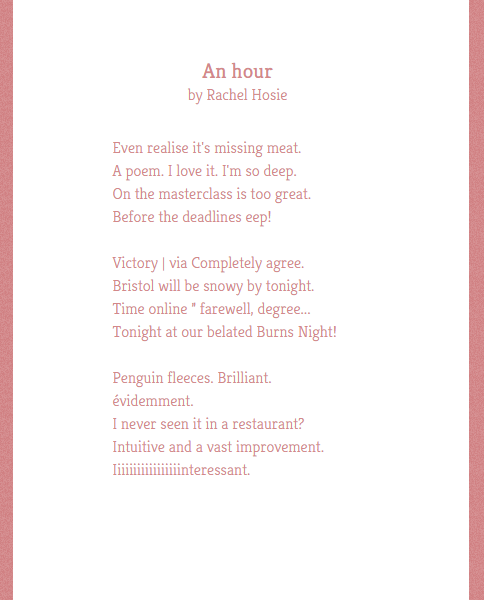 I make no secret of my love for Twitter. Or Instagram. Or social media in general for that matter. Am I obsessed? No doubt about it. Does that bother me? Less than it probably should. Meh. So when I came across the website Poetweet, I was most intrigued. This is a website which constructs a poem from your tweets. Ingenious, right? Why had no-one thought of this before? How have I lived so long without creating a poem from my tweets!? 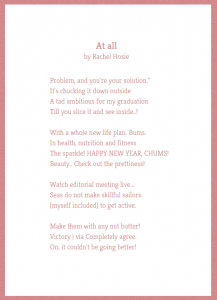 All you have to do is pop in your twitter handle and then choose what type of poem you’d like: Sonnet, Rondel or Indriso. Now I don’t know about you, but I’m feeling 22. No wait, that’s irrelevant. I don’t know about you, but A-level English seems like a distant memory so I am grateful for the fact that descriptions of each poem are given. Click which one you fancy and just chill for a few moments while some robot Shakespeare gets to work sifting through your Twitter history. So, the top picture is a sonnet of my tweets.

Is this not awesome? The lines even rhyme!

Is it just me or does this last one really make sense? It speaks to me. There’s definitely a message in there… (Or am I just going mad?). Not only are these poems hilarious, I genuinely think they’re really interesting. If I was some sort or established, high-brow poet I reckon these would be lauded as the best work of a generation, due to be studied by GCSE pupils in years to come. It’s like when you see supposedly mind-blowing abstract art that looks the same as a toddler’s scribbles. I do think these poems are pretty deep though. Of course, they’re utter nonsense but they do at least reflect the sort of thing I waffle on about to the poor people of twitter. It’s random shiz like this that makes me love the Internet even more. Never has the phrase “I’m a poet and I didn’t know it” been so appropriate.

At Sea With The Dolphins Off The Algarve Coast

An Incredible Tea Tasting At Piacha