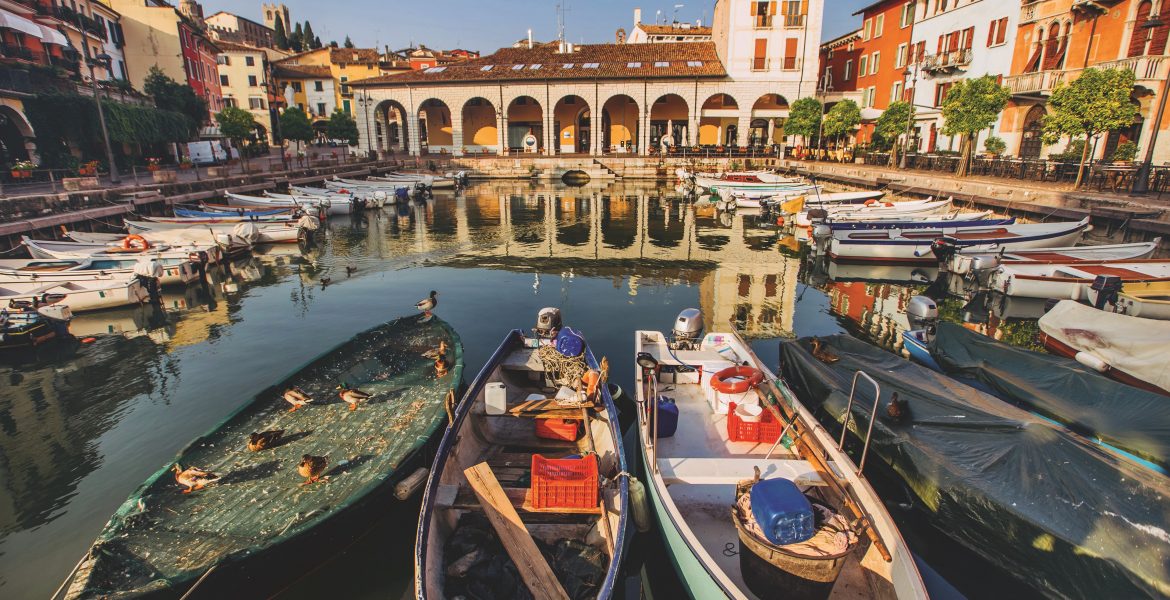 After the baking hot weather we’d had during my first couple of days in Italy, Em and I had planned a day of sunbathing and swimming in Lake Garda for my final dose of la dolce vita. We’d had a few days powing out visits to Bergamo, Venice and Verona, and quite frankly the prospect of a more chilled day soaking up the sun was highly appealing. Unfortunately Mother Nature had other ideas. It wasn’t hot and sunny on Sunday morning. Not to be deterred, Em and I decided to optimistically throw our swimming cozzies in our bags and head off to the lake anyway. Just half an hour on the train from Verona you’ll find Desenzano. I’d never heard of it before and it took me all day to remember the name, but Desenzano is a town on the edge of beautiful Lake Garda, on the southern tip of the Italian Alps. With its tropical trees, boats and (albeit pebbly) beaches, Desenzano has a distinctly seasidey feel. Almost exotic, if you will. It certainly has a noticeably different vibe to Verona, that’s for sure. 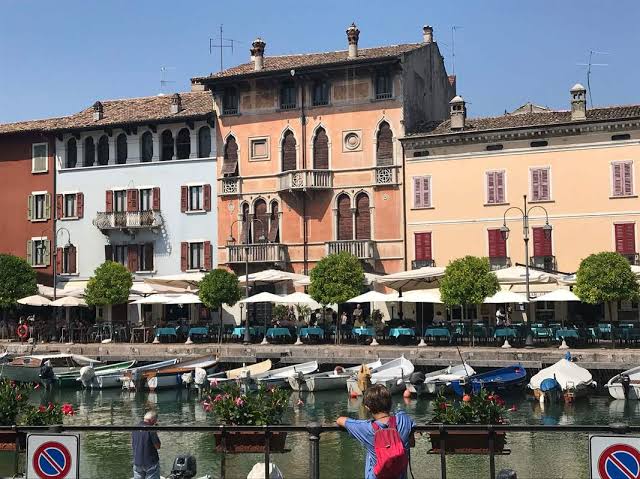 Em and I headed straight for the water and took a stroll along the pier. If it weren’t for the fading mountains I could see across the lake – it was a wonderfully clear day – I would’ve thought we were at the coast. It was like nowhere I’ve ever been, and it sure was beautiful. There’s something really comforting about being by a large body of water, so Em and I picked a sheltered bench by the lighthouse to sit and eat our packed lunches. The water was plopping against the boats, the waves were crashing against the rocks behind us, flags were flying in the breeze and the boats were gently bobbing up and down. Combined with the squawks of the gulls overhead, the sounds of the boats and water made us feel delightfully peaceful. Back in town we noticed a little market. It wasn’t huge, but there were various things to peruse, from fresh fruit to jewellery. I am a gal easily distracted by sparkly and yummy things.

Realising I hadn’t bought anything (aside from food, obvs) over my few days in Italy, I decided to treat myself to these pretty earrings. You’ve got to have a souvenir of some sort, haven’t you? Having had salads for lunch, it wasn’t long before we decided it was gelato time. And gelato connoisseur par excellence Emily knew just where to take me: La Romana. Oh sweet lord, this gelato was in a league of its own. Without a doubt the best ice cream of my life. And I’ve eaten a lot of ice cream. It’s all homemade and kept covered in store – that’s how they keep it at optimum temperature and consistency. They have really interesting and unusual flavours too (although it took translations from Em and the friendly serving lady for me to learn this.) The gelato is served not with scoops but rather spatula thingies. Apparently this means it’s good, although to be honest with you I’m not sure why.

For a reasonable 2.50€ you can get three flavours (hey, we’d had salad for lunch! That’s how healthy eating works, right?). Feeling slightly overwhelmed by choice, I picked the same three as Em.

The interior of La Romana (it’s a chain by the way) is clean, bright and stylish, so instead of heading out to eat our tubs of deliciousness and risking meltage, we sat down inside and savoured every spoonful with a view of the cathedral. After taking the obligatory selfies, natch. This gelato seriously has a completely unique and utterly delicious consistency: it’s super creamy, and our flavours were chock-full of, well, choc, brownie bits and almonds. It’s hard to explain just why this gelato was so insanely good, you’ve just got to try it for yourself one day. The afternoon kept getting better: as we left La Romana we realised the sun was coming out. Praise be to God! We took a stroll back to the lake and decided to sit down on the edge of the jetty, feet dangling over the sparkling water.

Alas, it wasn’t quite hot enough for us to strip off and join the ducklings and swans, but just being by the lake in the sun was a treat. I made sure to savour the moment. This, I thought, is what the year abroad is all about. After a while we decided to go for a little wander in the town, and we were passed by this hilarious and oh-so-Italian troop of Vespa-riders.

Desenzano isn’t exactly the most hip of towns, but I liked it a lot.

The afternoon was on its way to evening and Em and I decided it was Spritz time. OK, it was only like 4.30pm but apparently anything after 11am is Spritz time for the Italians. They blimmin’ laaaaave the stuff! Over my four days in Italy I saw everyone drinking the strangely bright beverage, so it was about time I had one myself. These are Aperol Spritzes – apparently they’re a north-eastern Italy speciality, which would explain why EVERYONE was drinking them over my travels. They’re a mixture of Prosecco, Aperol liqueur and sparkling water. And I like them. I also liked that you’re generally brought bowls of crisps for free alongside your Spritzes. You know we nommed all ours in minutes. And then asked for refills. You gotta get all the free food you can, right? Mmm… Tortilla chips. We sat outside, sipping our Spritzes, people-watching and admiring the wonderful view over the lake. A blissful moment indeed. And that, dear friends, not only concluded my day in Desenzano but also just about ended my trip to Italy. It was so so so great, not only due to the wonderful places I saw but also because I was sharing it all with one of my dear dear friends.